On 1st March 2022, Labour Party members in Rotherhithe selected me to be one of their Labour candidates in the May 5th Council election. It was a great honour and privilege to win their support and, confident of a Labour win, I looked forward to representing the people of Rotherhithe, tenants and residents.  On the 31st March, the central party machinery arbitrarily deselected me, against the wishes of my local party and many Labour councillors.

I was selected because of my promises to fight for rights to housing, public services and food, to strengthen grassroots local democracy and tackle climate crisis. Our rights are being eroded due to huge government cuts in council budgets. I support Labour councils coming together nationally to fight the cuts. We need a Labour government to fully fund our services.

As a community food activist and dietitian, I am proud that Southwark Labour council is one of only four councils in London to provide universal free school meals to primary school children. Southwark as a ‘living wage’ borough take measures to alleviate poverty. As a lifelong socialist, trade unionist and community activist; a working-class woman with a PhD in Food Policy, I actively support the Right To Food.  Facing malnutrition and hunger creeping into our communities, I help organise free and affordable foods in SE16. With others, I successfully campaigned for the Labour Group’s manifesto to include Southwark becoming a Right To Food borough.

On Wednesday 30th March, I was re-interviewed by London Region, on the premise of two social media posts. I was asked questions on all sorts of matters, accused of doing no campaigning and not attending branch meetings. The panel claimed that I want the Council to set an illegal budget, based on a 2019 blog post on the general election and food inequalities, highlighting a sentence regarding using the reserves held by councils to avoid cuts, and its supporting reference. Despite clearly stating that I only support legal budgets, and despite me telling the panel the same, they refused to believe me.

The panel recommended I be de-selected because:

I wholeheartedly rejected the accusations made and provided written evidence and witnesses to the appeal to the London Labour Party on Thursday 31st March. My witnesses were:

Despite this evidence, and despite me showing that I have support of the LCF, councillors and others in the party, the London Labour Party barred me from standing as a Labour councillor.

The Labour Party has a democratic tradition based on clear rules. The selection process is at the heart of the Labour movement; to find within the community, citizens able and willing to represent the voice of ordinary working class, struggling, exploited, marginalised and vulnerable people. Thus, the process of identifying candidates is thorough with the final stage at the local members’ branch level vote. If Labour members are to trust this process and its integrity it cannot be undermined by unexplained and unjustified interventions from the central machinery of the party. The replacement of an elected candidate cannot take place arbitrarily without implying that the whole process is void of meaning and validity.

I continue to support Southwark Labour and hope to work with them to ensure we become a Right To Food borough and to stop malnutrition and hunger creeping into our communities.

Here is the flyer sent to Rotherhithe Labour Party members that asked for their support: Sharon Noonan-Gunning Flyer to LP members

Hunger Is A Political Choice

Two weeks before my de-selection I joined delegation to Downing Street calling on Rishi Sunak to deliver the Right to Food in the budget. Here I am with some of our brilliant SE16 Right To Food community, Labour MPs – Ian Byrne, Janet Daby, Dave Kelly (Fans Supporting foodbanks)  and others #HungerIsAPoliticalChoice 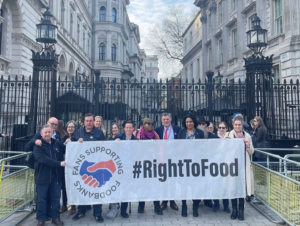 …this is a highly unusual situation…. Southwark Local Campaigns Forum (LCF) is the democratically elected body tasked with running the selection of council candidates in the borough… Southwark LCF had no involvement in the removal of Sharon Noonan Gunning. London Regional Party staff members called Sharon to be re-interviewed at an incredibly late stage in the process, after she had been selected and after she had already under gone two interviews with Southwark LCF ….decision to impose a candidate that had been selected in another ward did not garner majority support on Southwark LCF.

However, the Regional Party imposed Bethan Roberts as the candidate in Rotherhithe…This process has been highly irregular.’

I have received a large number of emails from members concerning the removal of your elected candidate for Rotherhithe, Sharon Noonan Gunning, and the imposition of Bethan Roberts as the candidate.

Firstly, this is a highly unusual situation. Southwark Local Campaigns Forum (LCF) is the democratically elected body tasked with running the selection of council candidates in the borough. As Secretary of the Southwark LCF I have had oversight of the whole process, working with LCF colleagues trying to deliver a fair and transparent selection process.

Secondly, Southwark LCF had no involvement in the removal of Sharon Noonan Gunning. London Regional Party staff members called Sharon to be re-interviewed at an incredibly late stage in the process, after she had been selected and after she had already under gone two interviews with Southwark LCF. As a local party we were not informed by the Regional Party that this was happening nor given the reasons why. Sharon’s re-interview was unsuccessful and she appealed the decision to the London Regional Board. As LCF Secretary I attended this appeal as a witness for Sharon stating that I had no concerns about her suitability as a candidate. The Chair of the Southwark Labour Group of Councillors, Cllr James McAsh, also attended this appeal as a witness for Sharon. The appeal panel was made up two members of the London Regional Board and one member of the South East Regional Board. Sharon’s appeal was not successful.

Due to the lateness of Sharon’s interview and appeal, the Regional Party followed an emergency process to impose replacement candidates. The decision was made by a panel of Regional Executive Committee members, though the Regional Director has declined to tell me which REC members they were.

This process has been highly irregular. As Rotherhithe Ward is a cross CLP ward it was my responsibility as LCF Secretary to keep you all informed and I apologise for not doing so. The time pressures of submitting nomination papers meant that it wasn’t possible. Your three Labour candidates in Rotherhithe Ward are Steph Cryan, Kath Whittam and Bethan Roberts. I realise some of you may be unhappy but I hope we can all come together to return a Labour Council from Southwark in May 2022 and three Labour councillors in Rotherhithe Ward.

I look forward to seeing you on the doorstep.

Not the Andrew Marr Show: bit.ly/39fcCAx